For people in parts of Capricornia, Wide Bay and Burnett and Southeast Coast Forecast Districts.

Heavy rainfall developing over parts of the Capricornia, Wide Bay and Burnett and Southeast Coast districts during Friday.

Weather Situation:
An upper low moving into southeast Queensland will result in widespread rainfall from early Friday morning. A surface low offshore from the Capricornia coast will extend a trough across the southern Capricornia district early Friday morning. The surface trough will act as a focus for heavy rainfall, and is expected to move slowly southwards through the Wide Bay and Burnett district during the day. The low is forecast to move close to the coast Saturday morning before weakening later in the evening.

HEAVY RAINFALL which may lead to FLASH FLOODING is forecast to develop during the early hours of Friday and continue during Friday and into Saturday. Six-hourly rainfall totals between 100mm to 160mm are possible.

Locally INTENSE RAINFALL which may lead to DANGEROUS AND LIFE-THREATENING FLASH FLOODING is possible with thunderstorms. A separate Severe Thunderstorm Warning will be issued if very dangerous thunderstorms with intense rainfall are detected.

Various Flood Watches and Warnings are current across the area, see http://www.bom.gov.au/qld/warnings/.

Locations which may be affected include Maroochydore, Gympie, Bundaberg, Gladstone, Nambour and Rainbow Beach.

Queensland Fire and Emergency Services advises that people should:
* Never drive, walk or ride through flood waters. If it's flooded, forget it.
* Keep clear of creeks and storm drains.
* For emergency assistance contact the SES on 132 500. 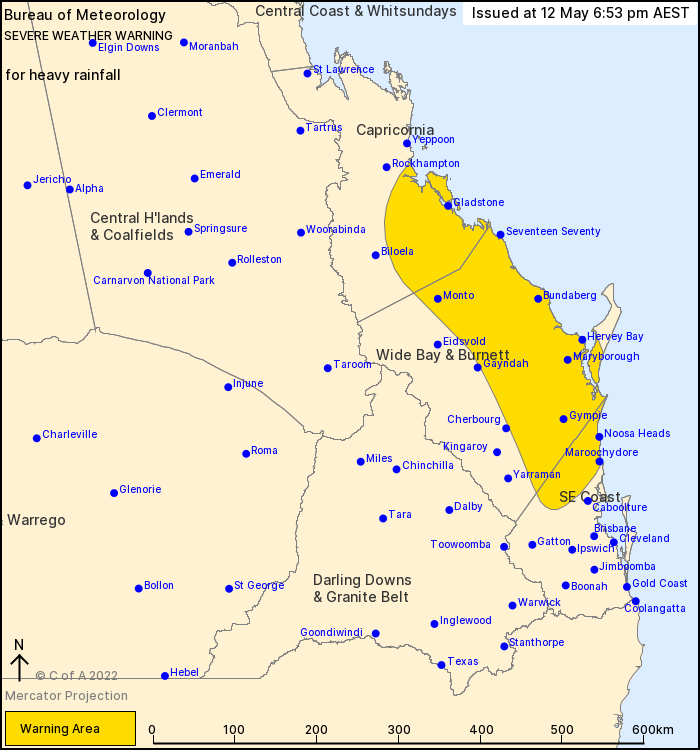