Weather Situation: A complex low pressure system moving across the Great Australian Bight and an associated trough and cold front are causing vigorous northwesterly winds across southeast NSW, as well as the potential for heavy rainfall from Thursday morning. This front will move offshore early Friday morning.

DAMAGING WIND GUSTS with peak gusts of around 90 km/h are possible over the ranges to the west of the ACT, as well as the eastern Great Dividing range from Bombala to south of Crookwell, extending north to the Blue Mountains during Thursday morning.
DAMAGING WINDS, averaging 80 to 90 km/h with peak gusts in excess of 125 km/h are likely to continue for Alpine areas above 1900 m.

Saturated soils in the Central Tablelands and Illawarra bring an increased risk of gusty winds toppling trees and powerlines.

Locations which may be affected include Braidwood, Goulburn, Bombala, Tumbarumba, Tumut, Khancoban and Thredbo Top Station.
Thredbo AWS recorded sustained winds of 85 km/hr at 11:12am Wednesday 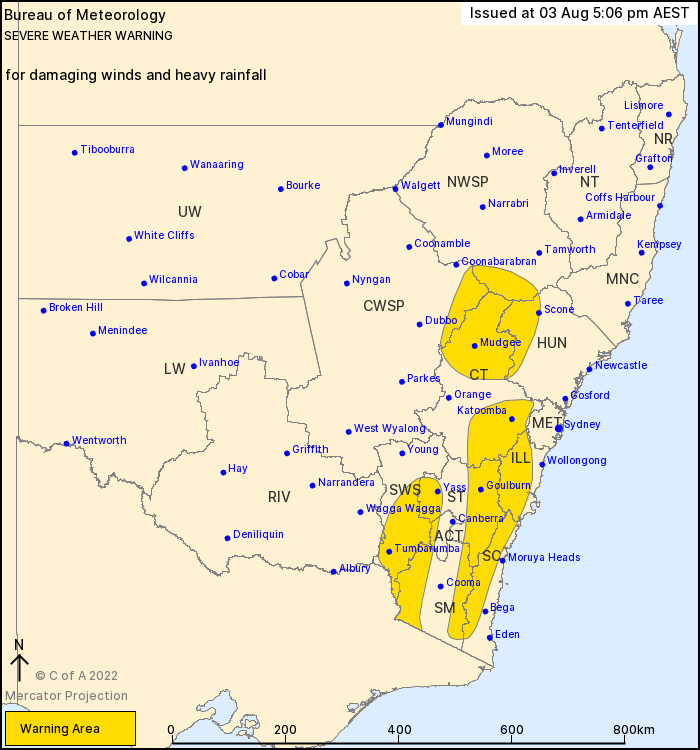