Weather Situation: A complex low pressure system moving across the eastern Great Australian Bight and an associated trough and cold front are causing vigorous northwesterly winds across southeast NSW, as well as the potential for heavy rainfall. These conditions will generally ease on Friday mornings, however a second front may lead to further damaging winds across the south on Friday afternoon.

HEAVY RAINFALL which may lead to FLASH FLOODING is possible for the next few hours about the South Western Slopes and western parts of the Southern Tablelands. Three-hourly rainfall totals between 30 and 40 mm are expected, with localised falls up to 50 mm possible with embedded shower and thunderstorm activity.

HEAVY RAINFALL which may lead to FLASH FLOODING is expected across central and northern parts of the Central Tablelands into the southern Northwest Slopes and Plains through this evening. Six-hourly rainfall totals between 20 and 40 mm are possible with localised higher falls up to around 60 mm with shower and thunderstorm activity.

Scattered severe thunderstorms are expected over southern inland parts of the state in the next few hours, Severe Thunderstorm Warnings will be issued as necessary.

Saturated soils in the Central Tablelands and Illawarra bring an increased risk of gusty winds toppling trees and powerlines.

Locations which may be affected include Wollongong, Nowra, Orange, Mudgee, Bathurst, Katoomba, Goulburn, Cooma and Yass.

Severe weather is no longer occurring in the Metropolitan district and the warning for this district is CANCELLED. 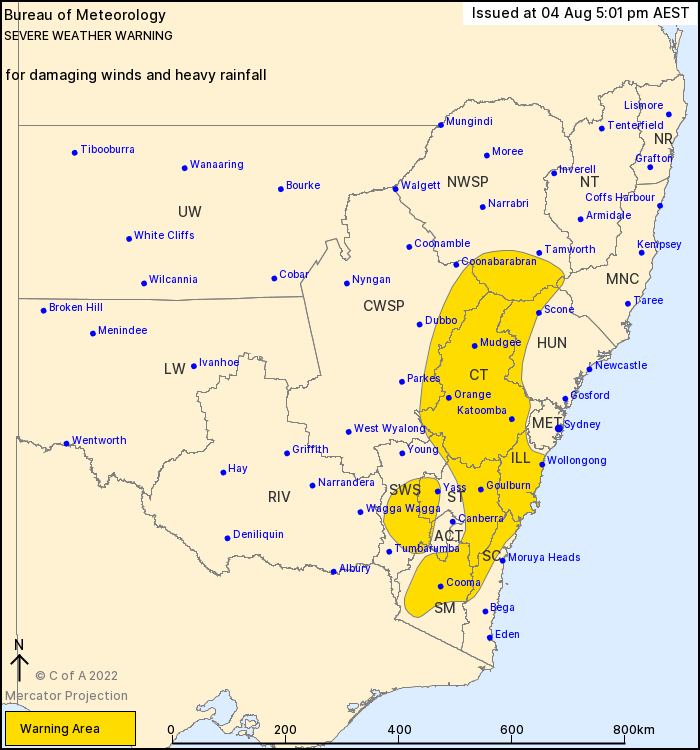