SEVERE THUNDERSTORMS ARE CONTINUING TO DEVELOP OVER SOUTHEAST QUEENSLAND

Weather Situation: A warm and humid airmass residing over southeastern districts together with strong winds aloft associated with an upper trough are generating severe thunderstorms this morning and into this afternoon.

Severe thunderstorms are likely to produce destructive winds, large hailstones and heavy rainfall that may lead to flash flooding over the next several hours in the Capricornia and parts of the Central Coast and Whitsundays and Central Highlands and Coalfields districts. Locations which may be affected include Gladstone, Rockhampton, Biloela, Yeppoon, Calliope and Mount Morgan.

Severe thunderstorms are likely to produce damaging winds and heavy rainfall that may lead to flash flooding over the next several hours in the Capricornia, Wide Bay and Burnett, Southeast Coast and parts of the Central Coast and Whitsundays, Central Highlands and Coalfields and Darling Downs and Granite Belt districts. Locations which may be affected include Warwick, Toowoomba, Dalby, Maroochydore, Gympie, Bundaberg, Rockhampton, Kingaroy, Stanthorpe and Gatton.

51mm in 30 minutes at Centenary Bridge. 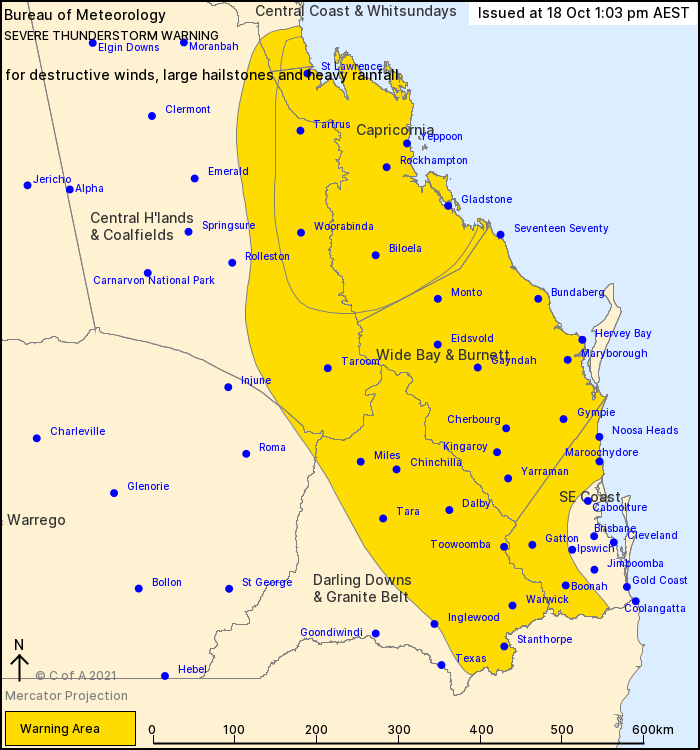