For people in parts of Central Coast and Whitsundays, Central Highlands and Coalfields and Central West Forecast Districts.

Issued at 5:32 pm Sunday, 24 October 2021.
A few severe thunderstorms continuing over parts of the Central Highlands and Coalfields district. A separate area of slow moving storms posing a heavy rainfall threat have developed a little to the north.

Weather Situation: A trough extends through the central inland parts of Queensland with a relatively unstable airmass on its eastern side. Thunderstorm activity in this environment will be capable of producing damaging wind gusts in the next few hours, with large hail also possible.

Another trough a little to the north is producing an increasing number of slow-moving storms capable of producing heavy rainfall.

Severe thunderstorms are likely to produce damaging winds and large hailstones over the next several hours in parts of the Central Highlands and Coalfields and Central West districts.
Locations which may be affected include Dysart, Jericho and Alpha.

Severe thunderstorms are likely to produce heavy rainfall that may lead to flash flooding over the next several hours in parts of the Central Coast and Whitsundays and Central Highlands and Coalfields districts. Locations which may be affected include Eungella. 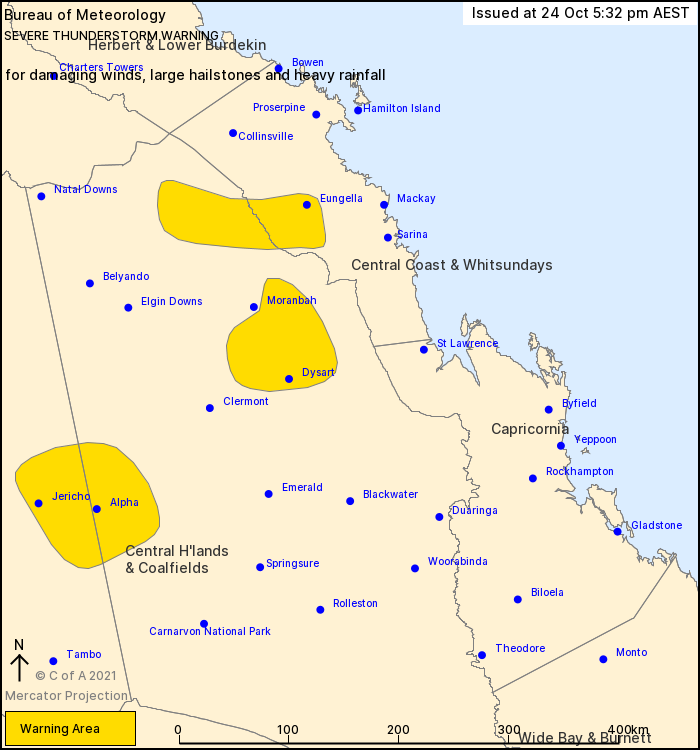