Issued at 5:20 pm Wednesday, 3 August 2022.
Damaging winds near southern coasts temporarily easing tonight, then redeveloping across most districts on Thursday

Weather Situation: A broad, deep and complex low pressure system lies over waters to the south of the continent. A front associated with this system will move over southern coasts early this evening. Another front on Thursday will result in a broadly strong to damaging northwesterly airstream with squally showers and thunderstorms.
Strong to damaging northwesterly winds averaging 50-65 km/h with gusts of around 90 km/h are possible across Lower Eyre Peninsula and Kangaroo Island early Wednesday evening. The risk of severe winds will ease later this evening, but conditions will remain gusty near some coastal areas tonight.

A re-intensification of the northwesterly winds is forecast from late Thursday morning, with a broader area of the State forecast to be impacted by potentially damaging winds, reflected by the warning area above. Winds will average 50-70 km/h a times with gusts in excess 90 km/h, peaking Thursday afternoon and early evening, before contracting to elevated terrain later Thursday and early Friday.

In addition squally showers and thunderstorms are forecast to develop across much of the agricultural area during Thursday, with local heavy falls are possible, particularly about the Mount Lofty Ranges Thursday evening. 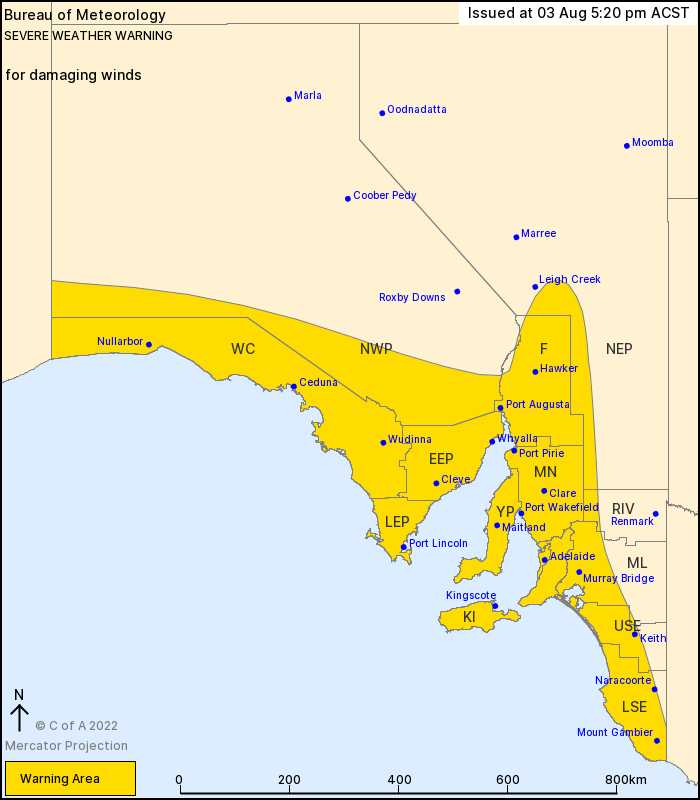