Damaging winds and local heavy rainfall overnight and on Friday, but slowly easing from the west on Friday.

Weather Situation: A broad, deep and complex low pressure system lies over waters to the south of the continent. A front associated with this system is over the south of SA and will result in a broadly strong to damaging northwesterly airstream with squally showers and thunderstorms.

DAMAGING WINDS will average 50-70 km/h at times with gusts in excess 90 km/h.

Conditions will ease over western districts before contracting to elevated terrain early Friday.

Squally showers and thunderstorms are forecast to continue. Localised heavy falls are possible, particularly about the Mount Lofty Ranges overnight and Friday morning.

A Flood Watch has also been issued for the Mount Lofty Ranges.

Severe wind gusts have been reported at several locations this afternoon, including Strathalbyn 109 km/h, 93 km/h at Hindmarsh Island, 100 km/h Murray Bridge. Raised dust over the western Murraylands this afternoon.

The State Emergency Service advises that people should:
* Move vehicles under cover or away from trees;
* Secure or put away loose items around your property.
* Don't drive, ride or walk through flood water;
* Keep clear of creeks and storm drains;
* Stay indoors, away from windows, while conditions are severe. 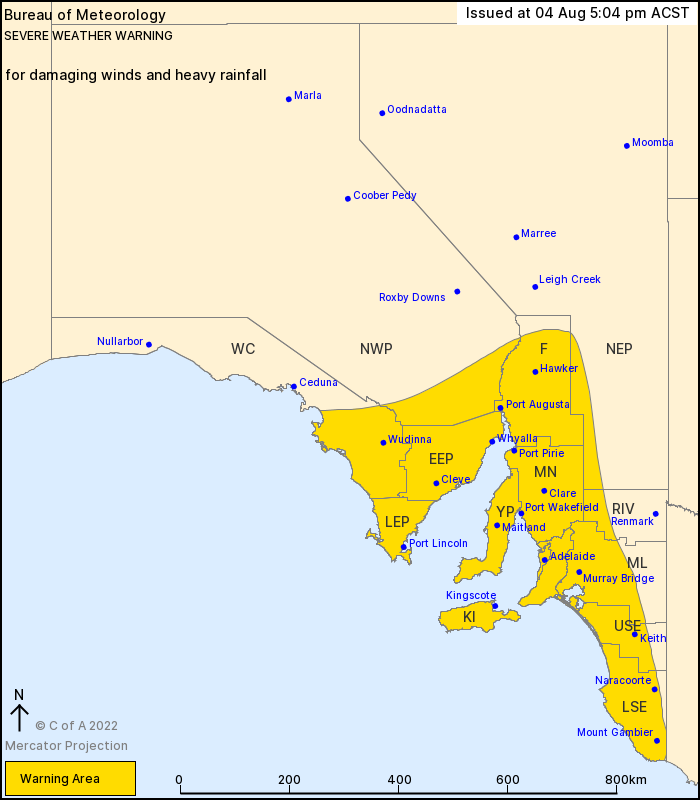