A trough crossing western and central parts of the State will clear the east on Monday morning. A cold front will cross Victoria overnight Monday into Tuesday.
Another cold front is expected to move into Victoria's west on Wednesday night.

In the 24 hours to 9 am Sunday, rainfall totals of 5 to 20 mm have been recorded in the flood watch area.

Showers will continue during Sunday, with further rainfall totals of up to 5 mm forecast for the remainder of Sunday.
With the first cold front crossing on Monday and Tuesday, rainfall totals up to
30-40 mm are forecast in the upper parts of the Yarra catchment, and 20-30 mm for the Bunyip, Dandenong, Otway Coast, West and South Gippsland and North East ranges catchments, mostly falling between midday Monday and midday Tuesday.
Isolated higher totals up to 40-50 mm are possible, in particular in the Upper Yarra and Otways, with thunderstorms. Similar totals are forecast with the crossing of the second cold front on Wednesday and Thursday.

Renewed river rises are expected in rivers within the flood watch area, which may lead to isolated and minor flooding from late Monday onwards.

SES advises that all community members should:
Never walk, ride or drive through floodwater, Never allow children to play in floodwater, Stay away from waterways and stormwater drains during and after heavy rain, Keep well clear of fallen power lines Be aware that in fire affected areas, rainfall run-off into waterways may contain debris such as ash, soil, trees and rocks, and heavy rainfall increases the potential for landslides and debris across roads.

Current Road and Traffic Information is available at the VicRoads website:
http://traffic.vicroads.vic.gov.au/

Flood Warnings and Flood Watches for Victorian Catchments are also available
on: Telephone Weather Service No. 1300 659217. 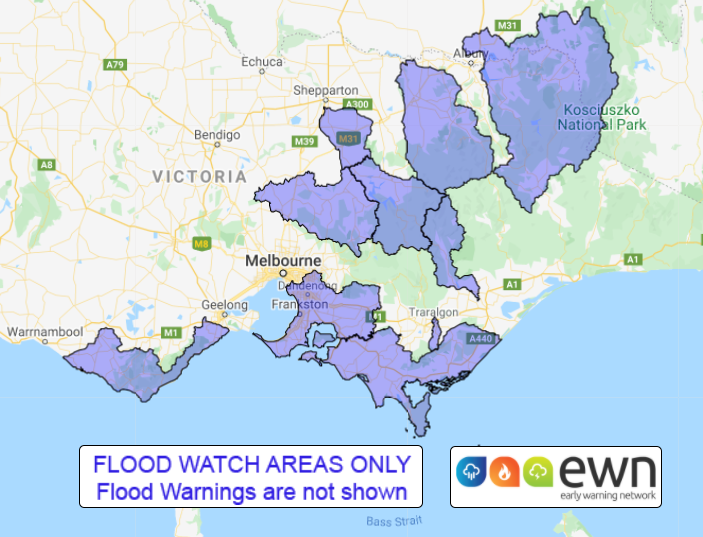